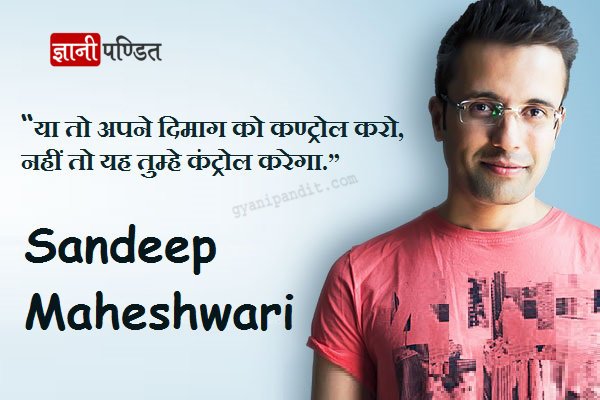 Sandeep Maheshwari is a name among millions who struggled, failed and surged ahead in search of success, happiness and contentment. Just like any other middle class guy, he too had a bunch of unclear dreams and a blurred vision of his goals in life. All he had was an undying learning attitude to hold on to. Rowing through ups and downs, it was time that taught him the true meaning of his life.

And once discovered, he consistently kept resigning from his comfort zone and to share the secret of his success with the entire world. It is this very urge of helping people and doing something good for the society that inspired him to take the initiative of changing people's lives in the form of "Free Life-Changing Seminars and Sessions".

No wonder people connect with him and his mission of 'Sharing' is now being actively propagated and practiced by millions. It is his diligent focus, the great support of his family and the faith of his team that keeps him going.

The starting point
His family was into the Aluminum business, which collapsed and the onus was onto him to fill in this crucial time of need. And as expected by any young guy, he started doing everything he could. Right from joining a multi-level marketing company to manufacturing & marketing household products. He left no stone unturned.

It was during this phase, he discovered interest and need beyond any formal education. Hence, instead of being a brilliant student, he opted to drop out of Kirorimal College, Delhi in the third year of B.Com. Rather, he embarked on the journey of studying yet another interesting subject. A subject called life.

Attracted by the scintillating modeling world, he started his career as a model at the age of 19. Witnessing the harassment and exploitation experienced by models, something in him moved. And it was this turning moment when he decided to help countless struggling models. With a mission within, he started small. A 2-week course in photography and there he was, a dime-a-dozen photographer with a camera in his hand. Nothing much changed. Moving ahead with a burning desire to change the modeling world, he set up his own company by the name of Mash Audio Visuals Pvt. Ltd. and started making portfolios.

Next, in the year 2002, he along with his three friends, started a company, which was closed within six months. But Sandeep's mind was still open. With the concept of "Sharing" in his heart, he summed up his entire experience in a reversed book on marketing. He was just 21.

It was the year 2003. He created a world record by knocking down a juggernaut task of taking more than 10,000 shots of 122 models in just 10 hours and 45 minutes. But as expected, he didn't stop. His focus was not diluted by the glamour and temporary adulation he got. Rather, this fueled his innate desire to revamp the modeling world further. At the age of 26, he launched ImagesBazaar. The year was 2006. Not being a massive setup, he took the job of multi-tasking. Being the counselor, tele-caller and a photographer all by himself, he paved his way forward. And today, ImagesBazaar is the world's largest collection of Indian images with over a million images and more than 7000 clients across 45 countries.

Sandeep has single handedly brought this paradigm shift in the modeling world. Countless models have been successfully launched with words like exploitation and harassment sidelined to a large extent.

It was this life-changing endeavor that made him one of the most renowned entrepreneurs of India at a young age of 29. His ethics resonating some of the philosophies like 'To Never Fear of Failures' and "Be Truthful to self and others".

Apart from being a successful entrepreneur, he is a guide, a mentor, a role model and a youth icon for millions of people all over the world. People love and adore him for his great mission of making everybody believe in them and helping people to make their life 'Aasaan' (Easy).

His unshakable faith in the divine power grants him strength to thrive. Being at the helm of success, it is quite astonishing to know that money does not lure him. And that's why, profits don't drive his organisation. It's an emotional bonding with each and every person working in the company that matters for him.

Capable of building an entire new industry or an organization, he is satisfied to adhere to his self-made benchmark that states, "If you have more than you need, simply share it with those who need it the most."

With a completely distinct aura than any other person of his age and stature, he rose above the rat race and broke through the age-old myth of 'Life is tough' with his simple mantra 'Aasaan Hai'.

And out of this root solution branched out numerous ground breaking realities such as, 'Money grows on trees', 'Success is not just about working hard' and the most interesting being "To say is easy, but to do is easier".

Cherishing all the bad experiences to be the great turning points of his life, his experience comes from bad experiences. Sandeep believes that whether you start from a rupee or a million, the important thing is to start and that too with your own money.

His vision is to ignite and inspire the entrepreneurial spirit of tomorrow's leaders and to help them succeed.


Mesothelioma law resource assist someone who has evolved the disease in the exposure of asbestos offering the felony sources and further steps for the mesothelioma settlements. Mesothelioma is the disorder that damages the cells which surround diverse internal organs like the coronary heart, lungs and the abdomen. It develops steadily within the human frame by destructive the mobile lining which covers those organs. Inhaling the asbestos materials fro…
Read more